St. John’s School is excited to announce its Intermediate Choir will feature on Global TV at 4:30pm on November 8th! In May 2020, the St John’s Choir produced a virtual performance of John Lennon’s “Imagine” to commemorate the 75th Anniversary of the liberation of Holland. We’re excited to announce this production will now be featured in a Global TV television special called “75 Years Later: The Sounds of Freedom”. The show commemorates the 75th anniversary of the liberation through a musical collaboration between the Vancouver Symphony Orchestra and the Dutch Symphony Orchestra. The show will focus on the stories of veterans and their modern-day relatives, using music as a thread to connect the various narratives together. Be sure to tune in and watch. “75 Years Later: The Sounds of Freedom” November 8th, 4:30pm, Global TV. Featuring the St John’s Intermediate Choir. 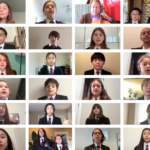 Stay connected with the ISABC Community by signing up to receive the ISABC monthly newsletter.
Sign Up Now
Back to top

The Independent Schools Association, BC, is an association of 27 outstanding schools distinguished by their provision of exceptional educational experiences, opportunities, preparation for post-secondary placements and development of international understanding. The ISABC links teachers and leaders to promote the sharing of innovative educational and leadership practices and ideas.